We have always had battles.

Mainly we use dangerous weapons. I mean, it's no fun if you can't accidentally lose an eye right? We use massive sticks, huge branches, metal shields and these awesome black swords made of solid polypropylene. (A medieval times warrior probably would have thought that they would make pretty good weapons) Keyword: dangerous. But really fun.


Not that we cared if it was dangerous, but it did get annoying with all the black eyes and bruised fingers. (Do you have any idea how bad it hurts when a huge sword made of solid black polypropylene 43" long weighing some 2 or 3 lbs comes swinging around and smashes into your fingers? You should try it sometime.)

We could also never really win a battle, because no one ever got killed. I mean, because we used such deadly weapons, we could never try to hit anybody, because it might kill them. So when we tried to take a fortress, it was really pointless because they would never retreat, and we couldn't make them. So we would just stand there fighting until we were so exhausted that we called a time out, and then we would do it all over again.

And then we discovered the wimpy weapons. You know, those foam covered things that don't even hurt when you get hit with them. What kind of a wimp would use those?

And you can make all of your own weapons! Huge axes, war hammers, swords, swinging flails and all kinds of other awesome stuff. All you need is PVC pipe, pipe insulation foam, and duct tape. With those simple tools you can create the greatest, coolest arsenal of foam weapons that ever was. Your enemies (friends) won't stand a chance. 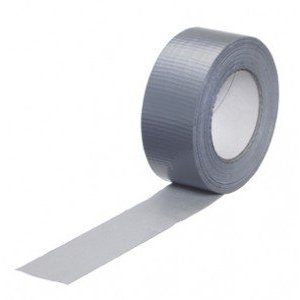 So we decided (the four of us Mena boys) that from now on all wars would be with foam. After making this decision, we went on to create the arsenal. I mean, it does take a lot of weapons to arm every kid at church right? We made swords, giant maces, axes, shields, pole swords, and an awesome swinging flail.

Then we brought them to a friends' birthday party. (To the utmost joy of the friend, and ultimate despair of the parents.)

It was awesome. I can't describe the feeling you get while charging down a hill, screaming at the top of your lungs and swinging a GIANT mace round your head. Then the two armies collide, and half the soldiers leave the battle field, mortally wounded. The rest turn round and charge again, and the last army standing wins.

Within 30 seconds the armies are resurrected, cured of their wounds, re armed, and the battle begins again.

These are some of our favorite weapons: 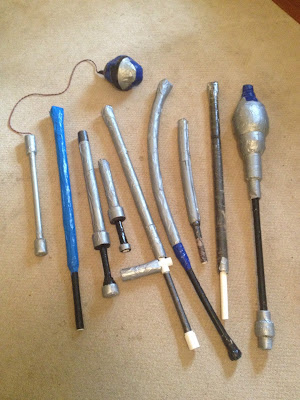 Yes, that is my GIANT mace, and my swinging flail thingy. (far left and far right) 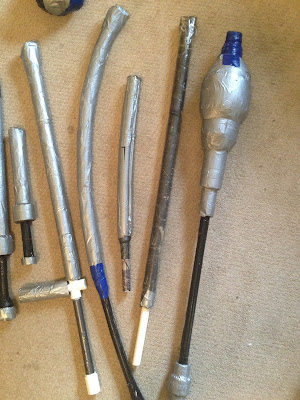 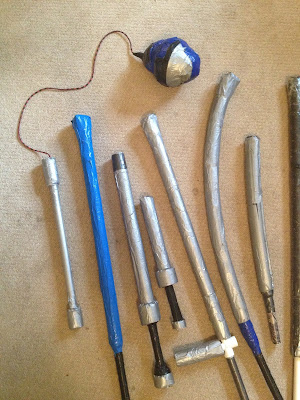 We have more, I just couldn't find them when I took the pictures. 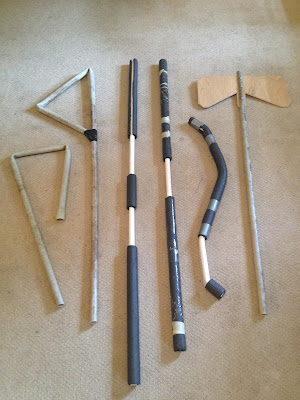 These are some weapons in progress. Three axes, one curved sword, and two Darth Maul style double bladed swords.
Posted by Unknown at 8:01 AM