3 Awesome Projects from a Galaxy Far, Far Away

As previously mentioned in several posts, I love Star Wars. I also love to make things. So, I end up making a lot of Star Wars stuff. Here are 3 of my latest projects from a galaxy far far away.

I wanted to make a lightsaber. (who doesn't?) But I didn't have the awesome metal pieces. So I did the next best thing, used a bunch of not awesome plastic pieces. How did I do this? Oh, I just went to the junk drawer and took apart the 20 or so broken flashlights in there, and then put them together wrong with hot glue. Yep, it's as simple as it sounds. The whole thing only took a couple of hours, and most of the time was figuring out how I wanted the different pieces to go.

I wanted it to look sorta like Obi-wan Kenobi's lightsaber. Or of that style at least.

This is what I came out with. Pretty good considering that I made it from trash. The grips are made of black electrical tape. The power source is a Kyber crystal, found in the ice caves of the planet IIum. True, the intergalactic shipping rates were rather high, and I had to have a smuggler deliver the diatanium power cells, but it was worth it. 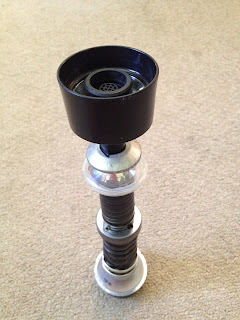 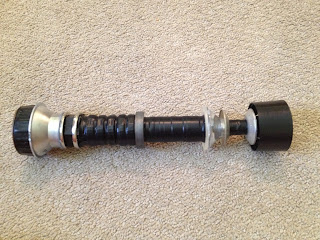 No, Mom didn't exactly approve of a real lightsaber, but she did think it was useful after I used it to cut through the front door when we got locked out of the house.

I also made a thermal detonator (a kind of hand grenade, for you crazy people who for some reason don't watch Star Wars). It is also made of trash. Cardboard and plastic, with yet more hot glue. Hot glue is my best friend when it comes to making things like this. When I made my Mandalorian armor I must have used 15 sticks of the stuff. Anyway, I also figured out how to make it light up and beep when you throw it. We had this old light up dice, which had a sensor so that when you dropped or shook it, it starting beeping and lit up red. It was perfect. I stuck that in the ball I had made, and then drilled holes in it so you could see the blinking red light and hear the beeping. So when you throw it: beep beep beep beep beep........KABOOM!!! Strangely enough, the dice never used to make the explosion sound. However, I have found that if you listen hard enough, while running for your life from the thermal detonator, you can actually hear it exploding. 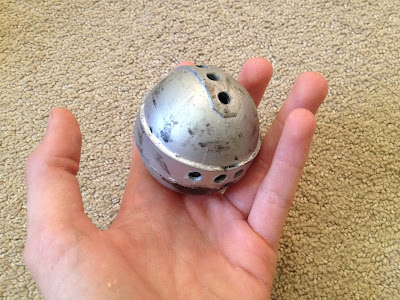 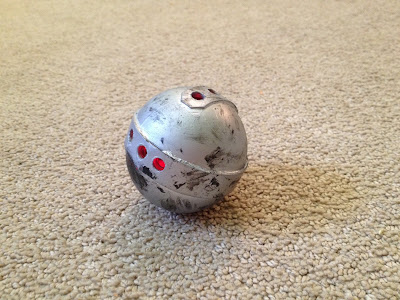 I also made a blaster. Yep, a Star Wars style modified Nerf gun. I used an old Nerf night finder, and modified it to look like a Han Solo blaster. It was a pretty simple mod, I really only took off the front, reassembled it with hot glue, and then added a PVC coupling. Then I spray painted it. It still shoots Nerf darts, just looks way cooler. The yellow spots is the paint wearing off, I need to touch it up.