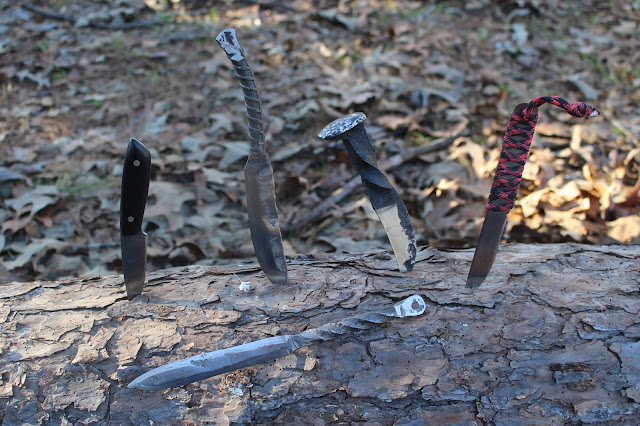 Well what do know, I just looked up today and realized that I haven't posted about any of my latest knives. And since I have made several since the last knife on here (the bushcraft knife), I figured it would be silly (and tedious) to post them separately; so I'm sticking them all here together with a short (or not so short) description of each. 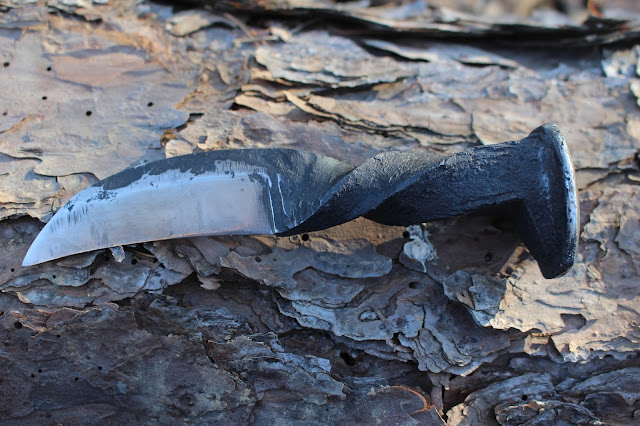 First up is this karambit knife, which I forged from a railroad spike. Kinda funny story, I actually made this one by accident. I was trying to forge a tomahawk head out of the spike, and was almost finished with the blade when I left it in the forge for too long and it melted in half. Just my luck. But I wasn't going to waste all that work, so I turned it into this. Its a rather short, awkward thing, since most of the usable metal melted, but it didn't turn out bad, considering.

The overall length is about 6", split evenly between handle and blade. (in other words, handle is 3", blade is 3") Kind of a three finger knife, really. A three finger railroad spike karambit knife. 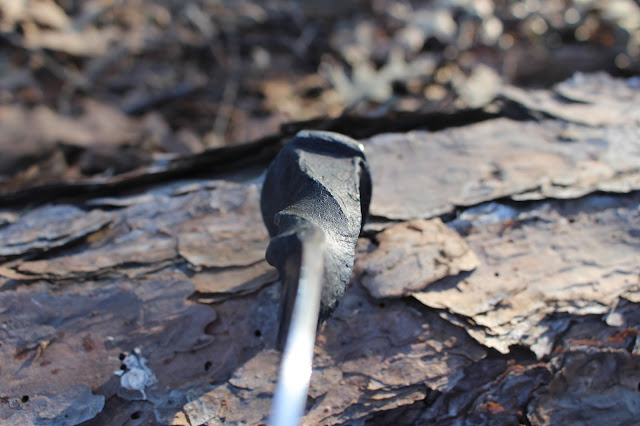 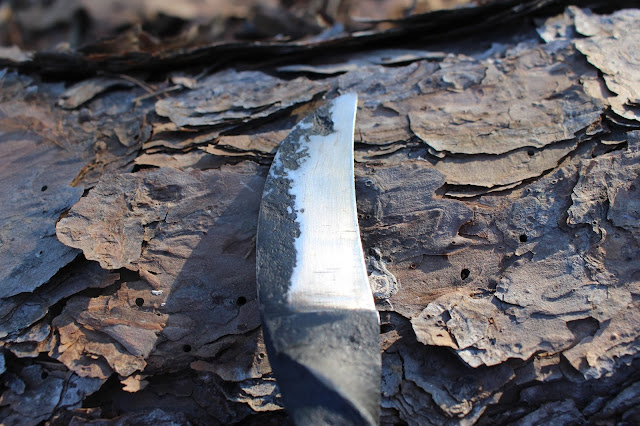 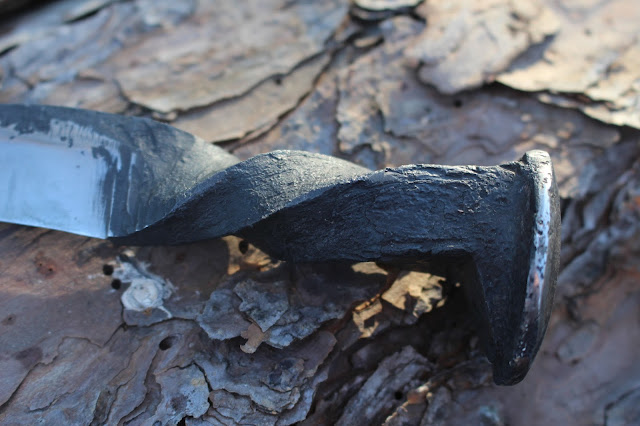 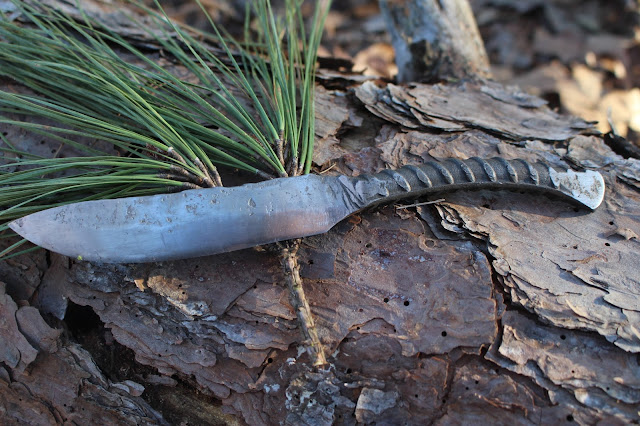 This one I forged out of a length of rebar. It is 9" inches overall, with a blade length of 4&1/2" and a handle length of 4&1/2". The blade is 1/8th of an inch thick. You can't see it in the pictures, but the blade is warped slightly to the right, one of my mistakes in forging.

As you probably know, rebar is generally not a good material to use when making knives, mainly because you never know just what's in it. It seems to be made of whatever made it into the melting pot that day, so it can be anything from good high carbon steel to nickel/crud alloy. Heck, I even heard of a guy who found a bar that had a 1/4" vein of copper running through the whole thing!
Because of this, it is really necessary to test each piece to see if it is hardenable steel. There are several ways to do this. The way I like to do it is to heat and quench a length of rebar like I would a regular knife steel, and then taking a hammer to it. A good high carbon steel should harden when quenched to become super hard and brittle like glass. When hammering on it, it should easily either crack or completely snap. If the rebar does not, then it failed to harden and is not suitable for turning into a knife. A second way to do this is instead of hammering on it after quenching, to take a file and try to file the metal. If it hardened successfully, the metal should be harder than the file, and the file will simply slide across it without biting in. A third way to test the metal which is easier, though not as reliable, is to use a spark test. That is to take your mystery steel, and attack it with a grinder, comparing the sparks to those put off by known knife steels. This works because different alloys put off different sparks. A high carbon steel puts off short, bright, flowering sparks, which differ greatly from other steels. In fact, high carbon steels with even slightly different levels of carbon content have discernable differences in sparks. If you wanted to, you could easily see what I am talking about by grinding something like a new nail, (crud metal) and an old metal file (high carbon steel). The difference between the sparks they put off is quite fascinating.

Another interesting thing to note when trying to identify good steel is how old the metal is. You see, like most things, especially good wine and cheese, steel improves as it ages. As it grows older, the steel slowly undergoes changes at the molecular level which breaks down the turinium sulficate and eventually charges the neutrons to produce a -

Actually, it used to be that most companies used good steel for stuff. Nowadays they have figured out how to make everything as cheaply as possible, which means everything is made of crud metal. For instance, RR spikes used to have decent carbon content, but all the spikes they turn out now are made out of this weird metal that doesn't rust, isn't hardenable, and looks funny. The same goes for nails, horseshoes, bolts, lawnmower blades, and even most files and saw blades. They just don't make stuff like they used to anymore. All that to say, the older a piece of metal is, the much more likely it is to have sufficient carbon content to make a good knife.

Another clue to helping discover if a metal might be good for knives is rust. High carbon steel rusts like crazy. It rusts without even getting wet, especially down where I live in the very humid state of Mississippi. There is enough water in the air alone to make my knives rust; even in the house in my dresser drawer. (which is why you can see rust spots on some of these knives if you look close enough) When searching for good steel, an easy way to quickly eliminate crud metal is to look for rust. For instance: if I find a piece of metal laying on the ground in the woods, covered by leaves, that I know must have been lying there for years; and it only has minor rust spots on it, I know instantly that it is not high carbon steel. If it was, it would have been covered with rust. Now of course, it could be some form of stainless steel, but it that doesn't really matter because for one; I don't know of any stainless that can be hardened without an extensive forging and tempering setup and lots of expensive tools, and second the chances of finding good knife grade stainless steel on the ground in the woods is rather slim. Of course, rust is not really going to help you identify exactly what alloy the metal is, but it is very helpful to be able to eliminate at a glance what is definitely not usable steel. 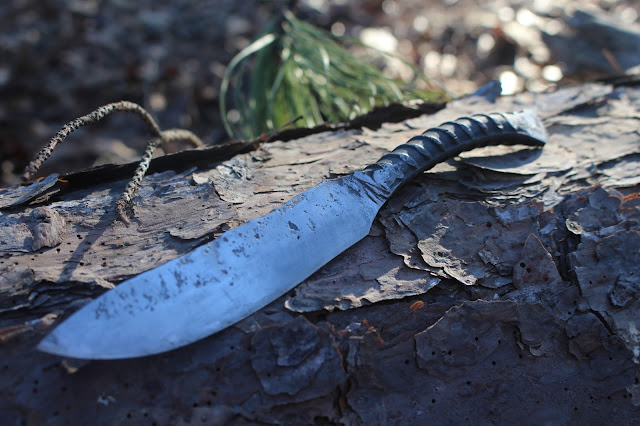 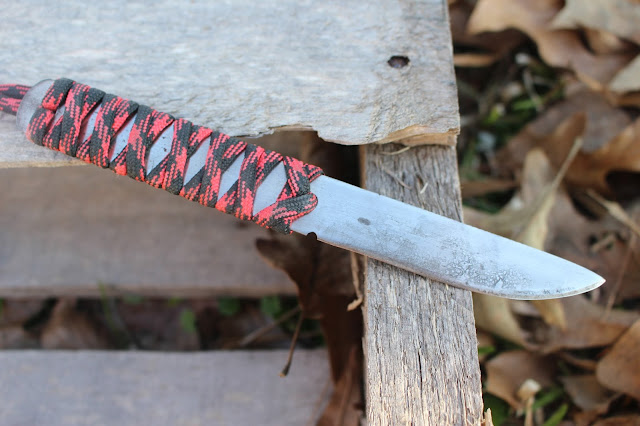 This knife I actually made at the same time as my Bushcraft knife, and you can see it beside my forge at the time in one of the pictures. I made this knife out of an old Sawzall blade, which was actually made of some decent steel. I didnt test the steel for hardenability beforehand, but it seems to have hardened up nicely. You can see a little bit of the teeth on the back of the spine, which I left on there. Gives it a cool look, doesn't it?

Make second note: keep away from the ones with carbide teeth, the steel is not as good because it is the teeth on those that do all the cutting, and the rest of the sawblade doesn't need to be hard

Because this was one of the first knives I made, the finish and grind is not as good as some of my more recent ones, as is evidenced by some of the scale I didn't grind off visible in the picture below. All considering, it turned out okay and is a decent little utility fixed blade. 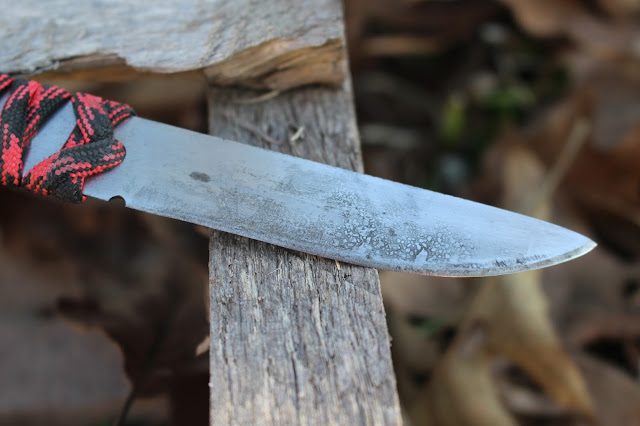 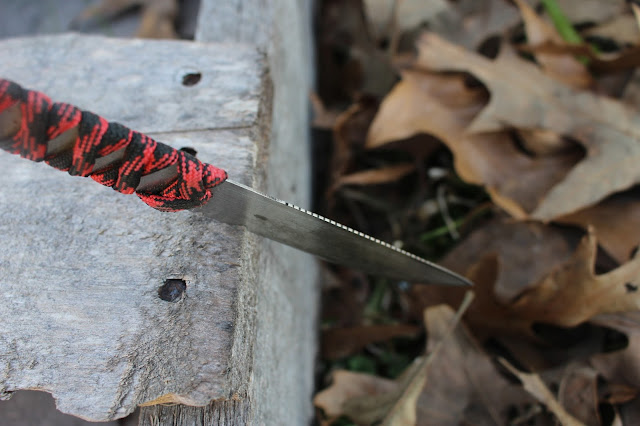 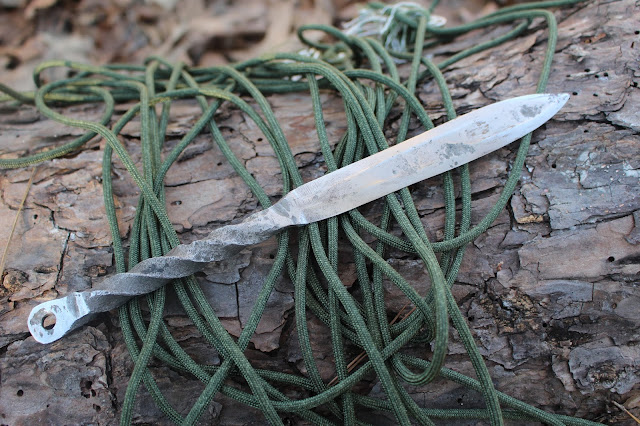 This is a letter opener, which I forged out of some random rusty rebar-ish metaI I found lying on the ground somewhere. I'm not going to say exactly where. (that information is highly classified)

Make Note: Railroad tracks are great places to find random rusty bits of metal that were discarded decades ago that no one will ever need or even dream of using again.

Make Second Note: It is also illegal to pick up random rusty bits of metal lying on the ground next to railroad tracks that were discarded decades ago that no one will ever need or even dream of using again.

Anyway, I forged it into this letter opener. It is 9" inches overall, with blade length of just over 5" and handle length of approximately 4 & 1/2". I also drilled a hole in the bottom of this double edged envelope destroyer, with the intention of putting on a decorative leather lanyard/thing; which I have not done up till this point. What can I say? I don't have much use for a letter opener at this time. Y'all should send me some letters. Then I'd finish it. 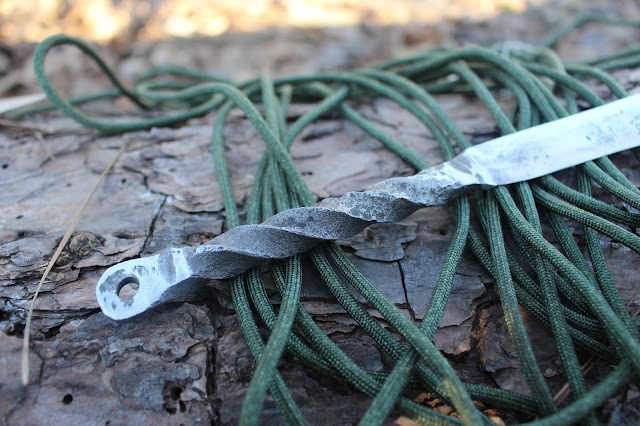 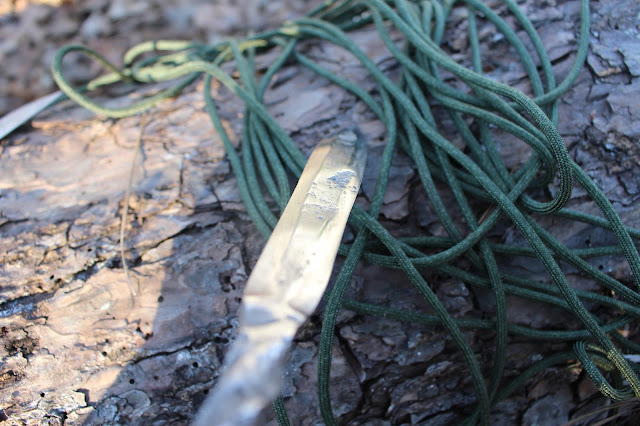 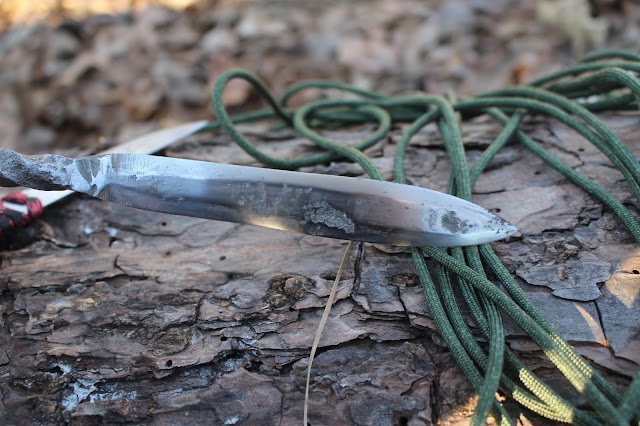 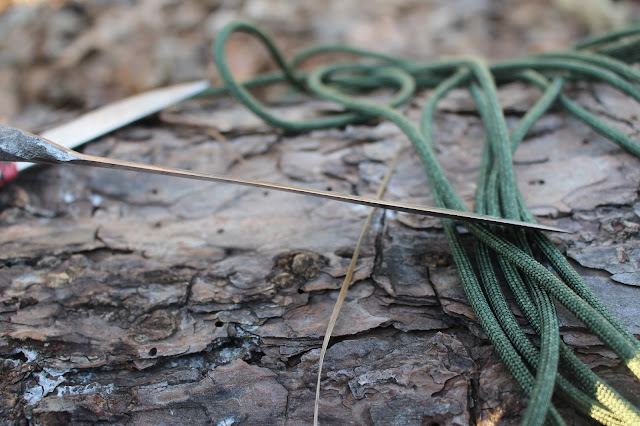 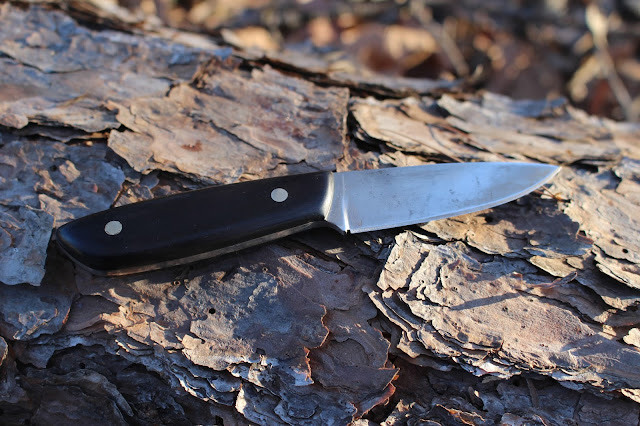 And finally, there is this little beauty, which is my most recent knife.

I think. Now that I mention it, I can't really remember. I haven't made a knife in months. What can I say? I've been very busy lately, and have been focusing on other projects. Well, that really is to say I haven't  finished a knife in months. I have at least four sharp bladed objects in the works at this time, most of which i started months ago, and knowing myself, probably won't be finished for months to come.

I made it using the stock removal method (grinding the shape out of flat metal stock, instead of forging it), out of 1080 high carbon knife steel. The handle pins are nickel silver rod, and the scales are African blackwood. I am extremely pleased with how the handle turned out, and can honestly say I think I nailed it perfectly one this one. The handle I mean. Not the blade. I goofed on the blade. But more on that later. I don't think I mentioned it before, but one of my mistakes on the bushcraft knife was making the handle scales too thick, and not sanding down the edges enough. I also didn't contour the handle to fit your hand well enough either, for that matter. And I didn't sand it enough, or work out enough of the cross sanding marks. On this knife I corrected all those mistakes, and came out with something I am really quite proud of.

Not to say that I didn't make any mistakes. If look closely enough and know enough about handmade knives you will see plenty of them, one being my tendency to stop sanding before I have worked out all the divots and scratches. (hand sanding for hours is not one of my strong points) You can also see a slight crack next to one of the pins in one of the scales.

The key mistake in this knife however was the edge geometry. It was my first time trying to do a double bevel, and I left the edge too thick when I went in to heat treat. As a result, my finished grind had far too abrupt of an angle. It would have been passable on a much larger blade with more weight behind it, but on a tiny little fixed blade like this it makes it very difficult cut into things. A small blade must have a slim edge profile, to allow it to easily slice through things; because it is so small and lacks the weight and leverage a larger blade would have.

So I messed up pretty bad, and this knife doesn't see much use because of that. However, even though I made a mistake which practically ruined the usefulness of the knife, making it was a valuable experience on many levels. I learned a lot in the process, and I won't be making the same mistakes again.

The same goes for all of these knives I made. Each one has it's own mistakes, but with everyone I learn so much. Every knife I make is so much better than the last. 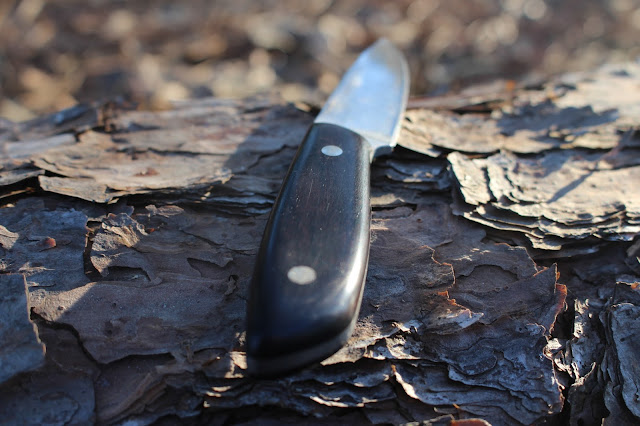 I just love how the sunlight makes the color in the blackwood pop. It is completely invisible everywhere else, it just looks black. But in the sun.... 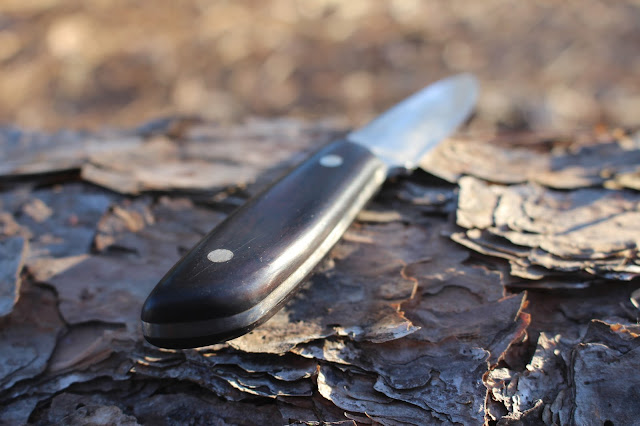 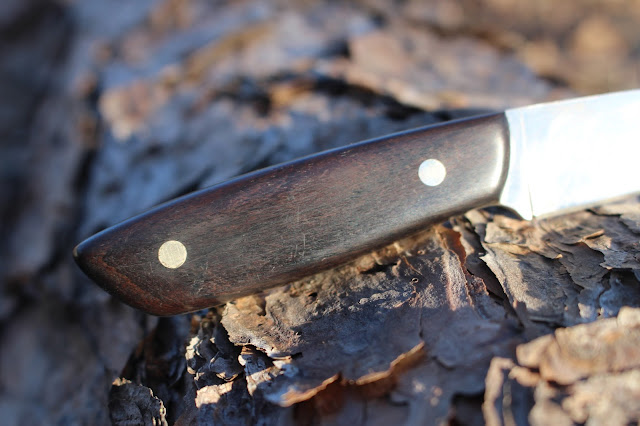 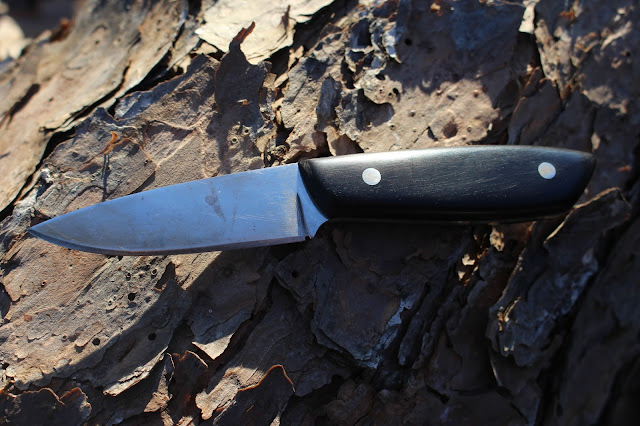 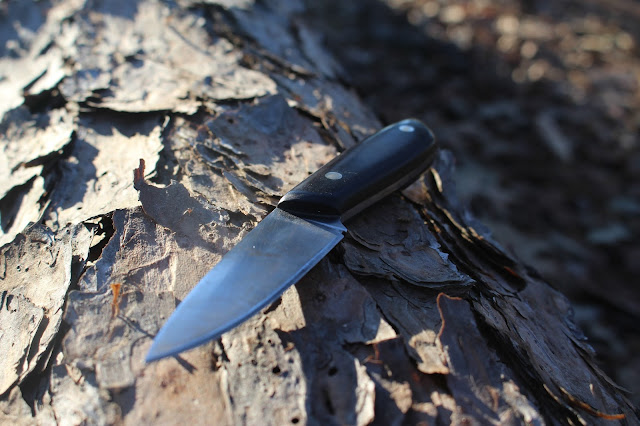 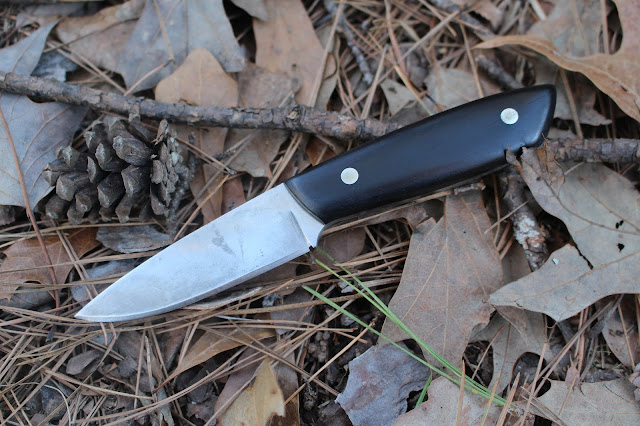 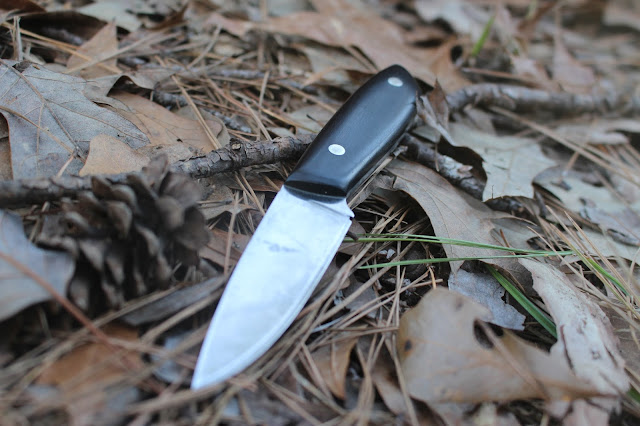 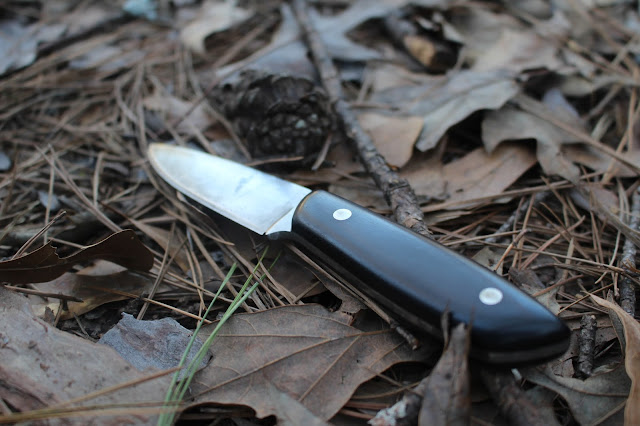 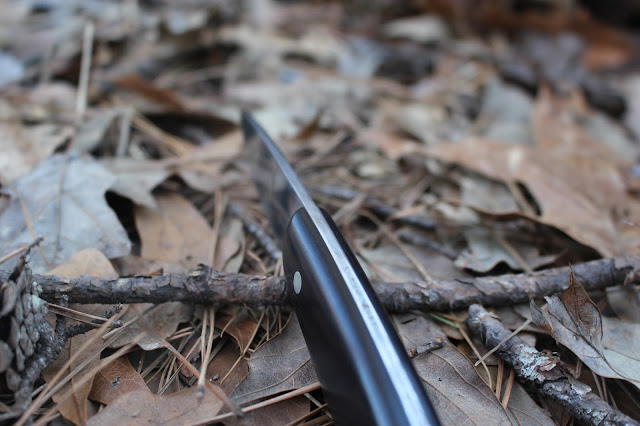 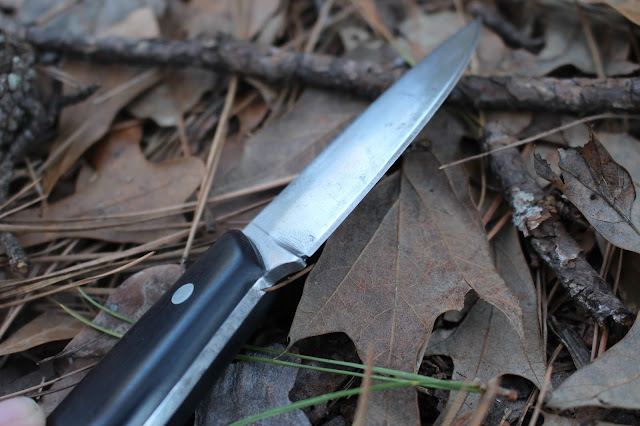