Knife from a railroad spike 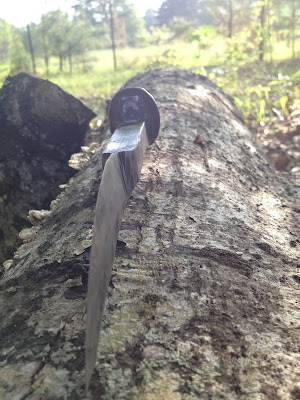 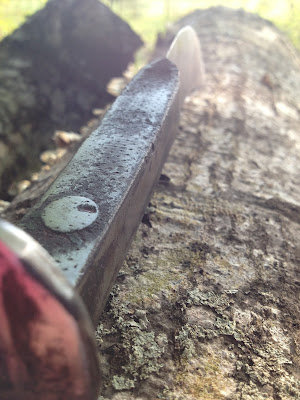 This is the most complicated knife I have made. That's because it was actually forged. That means heated to a bright orange in the forge, then flattened with a big hammer. Not very complicated, right? You have no idea.

It was more complicated for me because I didn't have any of the proper tools. My forge was too small for this kind of project, and I didn't have an anvil, or any blacksmithing pliers to hold the railroad spike. For the anvil I used an old broken weight, which I sunk into the ground. I held the spike with a pair of vice grips. (A real blacksmith would have shuddered at my methods)

My forge was way too small for this project, so I had to partially take it apart to be able to stick the front of the railroad spike in the coals. After a couple of minutes the spike would be glowing, and I would quickly take it out and begin to pound on it with the hammer. In doing so the spike would be jarred out of the vice grips and fall on the ground, which would immediately start the grass on fire. I then had to quickly pick the spike up with vice grips, set it on the weight, and pound out the fire with the hammer. By this time the spike would be too cold and I would have to stick it back in the forge. Of course, then I would have to add more coal to the forge. All this while wearing giant gloves, a face shield, and praying for it to not start raining. After going through this cycle about twenty times, and getting the spike somewhat flat, I figured I would just have to finish shaping it with the grinder.

After a lot of grinding and sanding, this was the finished product. I am actually somewhat surprised that I succeeded in making it.

Oh, and I am going to wrap the handle with something, I just haven't yet. I also haven't made a sheath for it yet. Too many other projects in the works, like a Jedi holocron and wrist comlink. 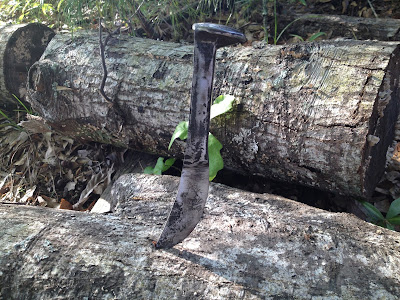 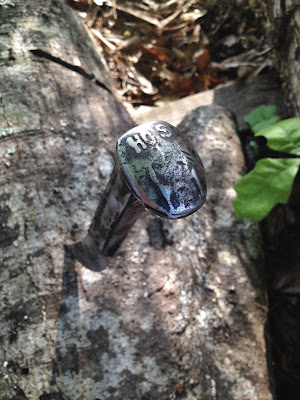 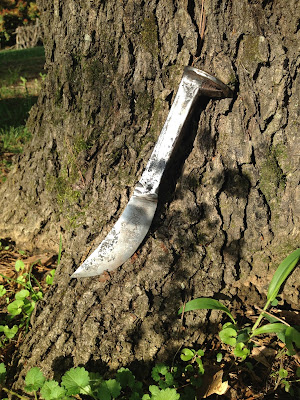 He had a view of the winners by operating from Newmarket Heath and studied the field, laying odds on each horse somewhat than two 토토사이트 propositions. Typically, on-line banking and PayPal are typically the best and best choices for moving cash out and in of an account. But what separates PointsBet from relaxation of|the remainder of} the bunch is its distinctive PointsBetting characteristic, which provides bettors with a possibility to win or lose further cash past that of a typical wager. More cash can be received or misplaced primarily based on the extent to which a guess wins or loses. Online sports activities gambling probably be} launched by late November or early December.