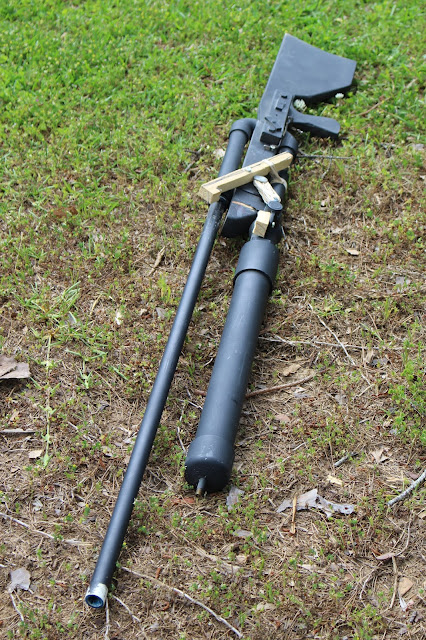 A while back (ok, a year) I did a post about the PVC air gun I had built. Well, I just recently made it a whole lot better by adding a trigger mechanism. I have wanted to add one ever since I built it, but never saw my way clear of doing so until recently. This is the contraption I came up with. 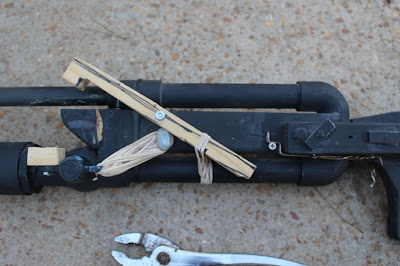 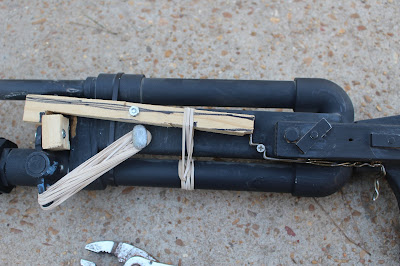 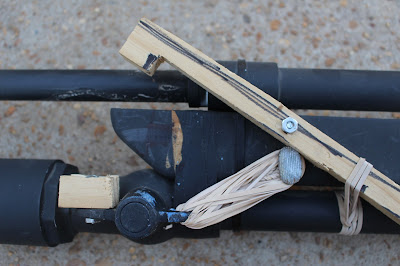 This lever locks the valve closed when in position. 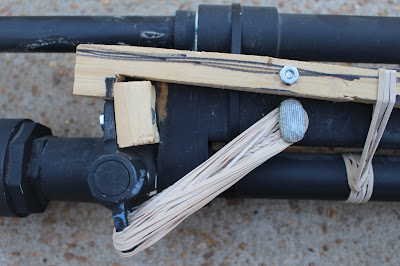 Both valve and lever are under tension by the rubber bands. 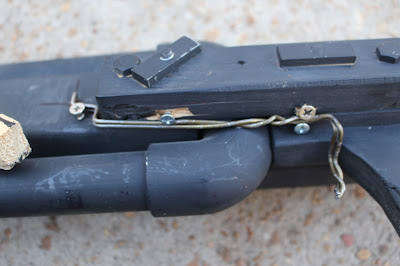 The trigger is made of a bent coat hanger, with screw holding it loosely in place so that it is able to move back and forth. 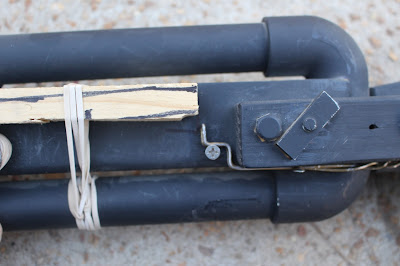 When trigger is pulled back, the lever is allowed to move freely; when pushed forward, the lever is locked in place, which keeps the valve closed. So when I pull the trigger, the rubber bands attached to the lever pull it down, which releases the valve, also under pressure by rubber bands. The valve flies open, and the air rushes through, firing the gun. 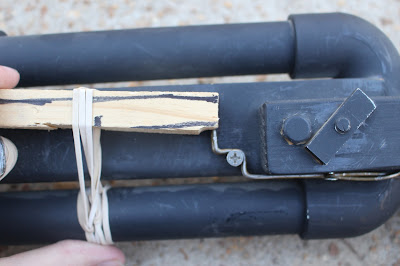 As you can see, the workings of it are very simple. It all depends on leverage. I have found out the hard way that without the correct leverage triggers don't work. That is what happened to a crossbow I built once. I didn't design my trigger to handle the pressure correctly, and the amount of pressure the bowstring put on it made it all but impossible to pull the trigger. Got to know your physics. 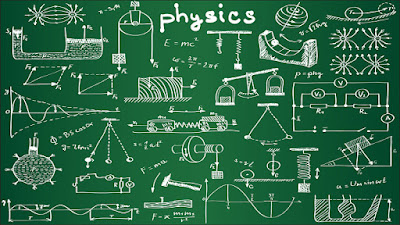 So I was careful to design it in such a way that the leverage did all the work, not my finger, and it turned out much better than I expected it would have.

The reason this gun really needed a trigger mech is that for one, ball valves like this are difficult to open, and tend to stick. That makes accurate shooting out of the question, as the motion required to open the valve drastically throws off your aim. Another downside to flipping the valve open is that the shots are less powerful, because not all of the pressure is released at the same instant. So with this trigger mech, my projectiles are actually moving faster than before. And I can shoot accurately, which is a nice bonus.

Many homemade airguns such as this bypass the trigger problem by using a solenoid valve from a lawn sprinkler system instead, which is a electric valve that operates by opening and closing a circuit, which in turn opens and shuts rubber seals inside that lets the air out of the chamber. In essence, the trigger is built into the valve itself. They are generally powered by a simple 9v battery. I did not, obviously, use a solenoid valve on this gun as it was the first I had made and I wanted to go the simpler route at first. However, if I make another air gun like this I will probably use a solenoid. And if you wanted to up it a notch, they make solenoids that can take very high pressures, which would be great for a metal airgun that operates at much higher pressure. Check out Joerg Sprave's Slingshot Channel on YouTube. He has made some very impressive high powered airguns using solenoids like that. 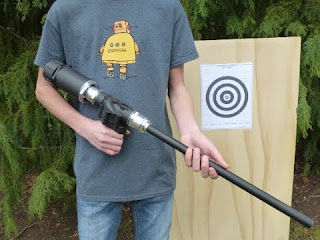 Here is a good example of a solenoid airgun. See that big funny looking black thing above his hand? That's a solenoid.