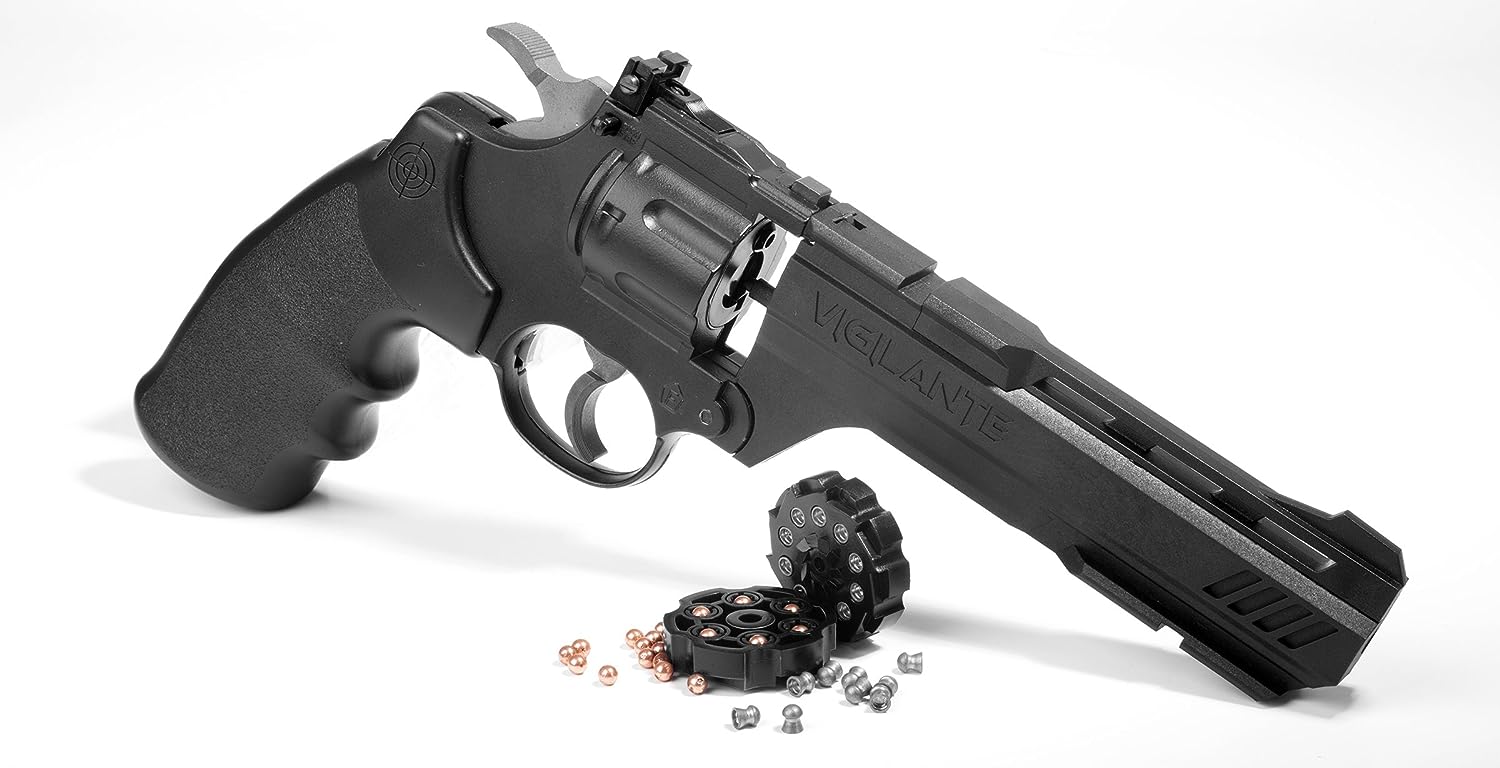 The Crosman Vigilante is a CO2 powered air pistol. It is a revolver, able to shoot both pellets and bbs up to speeds of 435 fps (feet per second). I bought it on Amazon.com for fifty bucks.

In my last post I talked about pellet guns and my Crosman Phantom break barrel pellet rifle. Since I already have a nice pellet rifle that shoots 1000 fps, why would I need a low powered pistol? Because the Crosman Phantom is 43" long and weighs 6 pounds. It's not easy to lug all over our land, especially if you want to carry something else. Or for those times when I am not hunting, and a squirrel drops on the ground in front of me, knowing full well that I am unarmed (haha). It is at those times that I want a pistol or other such small gun that I can put on my belt and forget it is there. Thus comes the Crosman Vigilante. (great excuse for getting it eh?) I picked the Vigilante for a number of reasons, the main one being that it is the highest powered, looks the coolest, and has the best reviews for the price. Also because it is capable of firing pellets and bbs, so that I can still use it if I am out of one kind of ammo. Not to mention that it is a revolver, and revolvers are just cool. 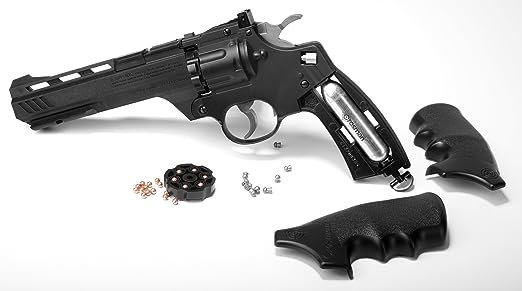 It is CO2 powered, which means that the gun uses a 12 gram cartridge of pressurized carbon dioxide to fire a pellet or bb. For a pistol, this is the best option, because a pump pistol must be very large, and it is is almost impossible to cock the barrel of a break barrel pistol, because the barrel is so short. The only downside is that the CO2 cartridge runs out after about 40-50 shots, and It can get expensive if you want to shoot a lot. The way to insert a CO2 cartridge is pretty simple. The handle comes apart in two pieces, one on each side of the handle, with the place for the CO2 in between them. You pop the handle apart, unscrew and take out the used CO2 cartridge, insert the new one, and tighten the screw on the bottom of the handle. You then pop the handle back together, and you are ready to go for the next fifty shots.

Pros:
Solidly built. The combination of metal and plastic material feels great. It has a nice heft. 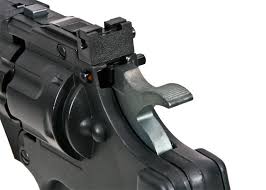 It has adjustable sights.
Two different weaver rails for mounting accessories, one on the top of the barrel, one on the bottom.

Single and double action, which is a nice feature. The heavy double action pull can get tiresome after a while, but the single action break is nice and crisp.
The barrel is rifled, for better accuracy.
Interchangeable clips, one for bbs and one for pellets.
Nice hammer safety, works well and exactly how I would want it to.
It is pretty accurate with pellets.

Cons:
The sights could be nicer. As they are plain black, it can be a tad hard to see them sometimes.
It would be nice to get more shots from a CO2 cartridge, but fifty per one is average for CO2 guns.
One of my main dislikes about this gun is the handle. The two plastic pieces on either side feel cheap compared to the rest, and after owning it for a while they don't clip in as well, and feel a bit loose. Not bad, but it definitely could have been better built. Oh well, cheap Crosman products aren't known for their high quality. One other thing, not really a con, more of a personal preference, is the size. I originally bought this to wear on my side around the land, and hiking down by the creek. I ordered it online, so I didn't get to handle it beforehand and didn't have a very good idea in my head as to the size. 11 inches is just a number until you are holding it. Then you are  like, "holy cow, this thing is 11 darn inches long!" It is a very large gun. And obviously, it has weight to go along with its size. As mentioned earlier, it weighs approximately 2 pounds. Which again, is just a number until you have it your side for an extended length of time. For those reasons, it didn't really work for what I originally bought it for. Nothing to do with it, simply my fault. So, if you are thinking about buying this gun, just keep that in mind.

Overall Report:
This gun does what it is supposed to do. It shoots accurately and looks good doing it. I can hit a soda can almost every time at fifty feet, which is excellent for a pistol with only a six inch barrel. I find that it is slightly more accurate to fire pellets than bbs, but you wouldn't notice it that much. You can also buy extra clips for this pistol, so that instead of having to reload the clip every 6-10 shots you can simply insert another pre-loaded clip. The accessory mounting rails on the top and bottom of the barrel means that you can easily attach a scope, flashlight, laser, or other such device to make the revolver even better. I will probably buy a laser for it just for fun. It has a few things that could be better, as with most things, but taken overall, its great. For someone looking for a fun little plinker that looks really cool and is accurate, this revolver fits the bill. I'd recommend it.
Posted by Unknown at 8:34 AM