So we have this old Cedar tree in the front yard, right in front of the power pole. Or right behind, depending on how you look at it.

Anyway, the power lines go right over it, and in the past few years the tree has grown up and around them. This doesn't make the power people happy. So yesterday they dropped by in a big truck with a bucket on top and informed us they were going to cut off the top half of our tree, leaving us with an ugly and undignified bottom. 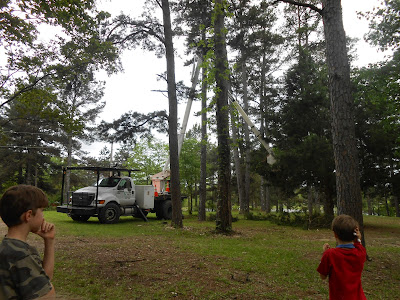 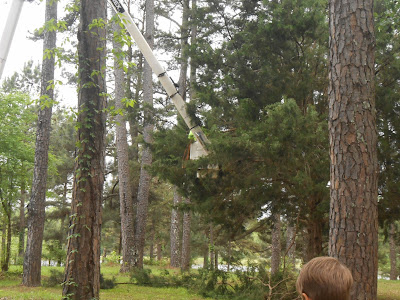 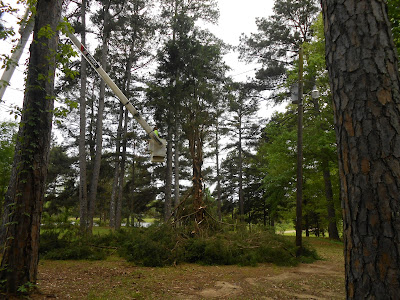 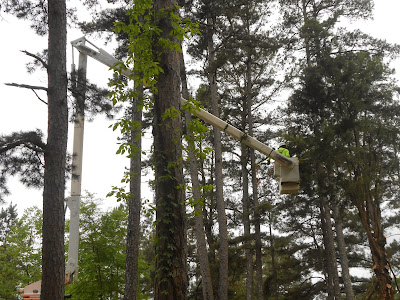 This of course, was just not cool. So we asked if they could just cut the whole tree down. They said they could, and so one of the guys got into the bucket with a chainsaw and began cutting it down from the top to the bottom. Soon we were left with nothing but a pile of branches and a bare trunk sticking up out of the ground. Then they left, telling us that another feller was gonna come by the next day to grind up all the branches.

You cannot be serious! All this awesome cedar just gonna be ground up and thrown away! How could they? Cedar has got to be some of the most beautiful wood ever. Each branch has a big round spot of purple heartwood running through the middle, making it really awesome for all kinds of projects.

Of course I had no idea what I would do with all that wood, but  I couldn't just let them destroy it all. So I grabbed my machete and headed out there. I got five or six big branches, about as much as I could ever possibly use, and stashed them in the shop. 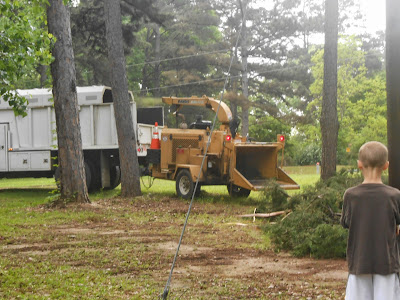 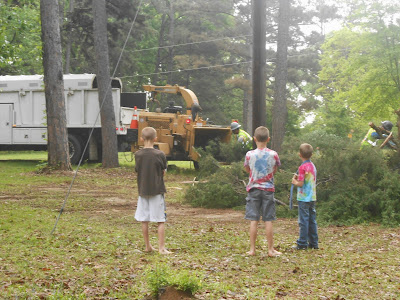 In the morning the guys were back, this time with a dump truck and a huge chipping machine. The chipper/grinder thing is really cool. The branches go in one end, get ground to a pulp, and then get shot out the other end and into the truck. The crazy thing is just how powerful that thing is. It is incredible. There is a giant spinning wheel in the front of the chipper, so that when a branch touches it, it is immediately pulled in, and within seconds is gone. The machine works so fast that in literally fifteen minutes they had disposed of all the branches and were gone. 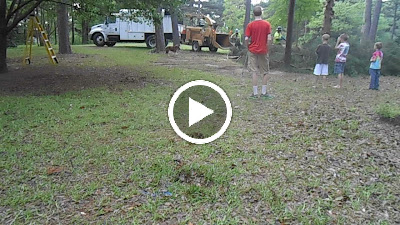 But they left the trunk. It is still in the ground, completely bare of branches, sticking up fifteen feet in the air. Your kidding right? Nope. Talk about ugly.

Anyway, now I have all this awesome Cedar I have no idea what to do with. Any ideas?

[Mom eventually called the power company and they finally came by and cut the trunk down.......two weeks later.]
Posted by Unknown at 9:21 AM